Cavitation is a phenomenon in which rapid changes of pressure in a liquid lead to the formation of small vapor-filled cavities in places where the pressure is relatively low.

One way cavitation affects your injectors is by inertial cavitation which can cause significant wear. This is due to the low-pressure areas forming bubbles in the liquid which rapidly collapse and produce a fatiguing shockwave.


Think about when you pour a cold glass of water and let it warm to room temperature. As the water warms, gasses dissolved in the water start to escape. This is visible in the bubbles that seem to form from nowhere. This is because the change in water temperature turns in favor of the dissolved gasses moving to an area where the pressure is less. Which in this case happens to be atmospheric pressure.

Same for bubbles formed in diesel fuel and subsequently your injectors. The bubbles move to a more suitable pressure zone, like the low-pressure area formed by cavitation. It just happens much more quickly and violently than a cold glass of water warming to room temperature, or even a shaken can of soda.

For this same reason, many diesel users will install an air separation unit between the tank and engine to cut down on the amount of air getting to their injectors. FASS has a good video showing other effects that air in your fuel can have. Like a low-density region in the fuel distribution just outside the injector nozzle. Which leads to lower engine performance and higher exhaust emissions due to an incomplete burn of fuel. This is another major side effect of cavitation. 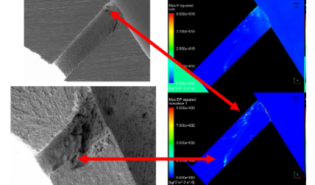 Eliminating cavitation is a major field of study in fluid dynamics. When speaking about fuel injectors a complete understanding of how cavitation occurs has been elusive.


If cavitation is not yet fully understood, how do you prevent it from happening?


While manufacturers try to design and optimize cavitation-suppressing injectors capable of higher pressures and improved performance, you can take care of your already well-designed fuel system. Fuel injector spray holes are barely the width of human hair. The smallest change in these small components can greatly affect the performance of your engine.


Poor quality fuel can cause corrosion in your injectors that changes the way your fuel was designed to flow thus increasing the chances of further damaging your injectors because of cavitation. The same goes for physical contaminants in your fuel.

Regular fuel system maintenance is necessary to reduce any damage that may increase the effects of cavitation. While an air separation system goes a long way in helping prevent damage to your fuel system, a diesel fuel additive like Opti-Lube can also be used at regular intervals to help break down physical contaminants and separate water found in poor quality fuels. With this, you also get added lubricity that can help your entire system run safer and more efficiently. Including the pump in an air separation system.


Protect your investment. Use Opti-Lube to reduce damage in your fuel system that leads to the further damaging effects of cavitation.
×

*FREE & FLAT RATE SHIPPING APPLIES TO RETAIL ORDERS WITHIN THE CONTIGUOUS US.