For years there has been a spirited discussion regarding the use of either an emulsifier or a demulsifier in fuel additives. Diesel people and additive producers often have strong opinions.

In order to better decide between the two, let’s first look at the differences that set each of them apart.

Arguments on the emulsification side make claims that demulsification can allow corrosion in the low points of the system without proper maintenance. While this could be a concern to some it is important to note that Opti-Lube’s Diesel Fuel Additives contain corrosion inhibitors, as well as cleaners to keep sludge and gum from forming at the water/fuel line. In our 18 years of business we have never known anyone that could link corrosion with the use of a demulsifier. 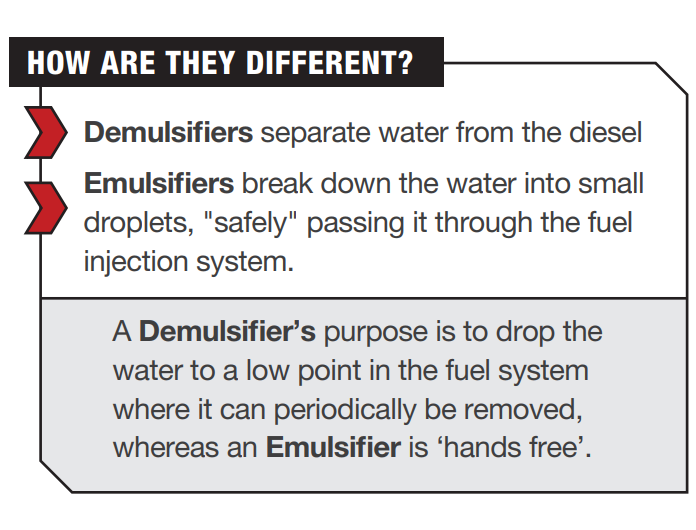 The big question with emulsifiers is what happens to a water/diesel emulsion when it's pressurized to 30,000 lbs and then exposed to the shearing effect and heat that occurs inside an injector? It seems like a no brainer that steam in the combustion chamber would be a bad thing. The other concern is passing water droplets through the injector nozzles. As injector nozzle technology advances they are becoming smaller and smaller making particles of any size a concern.

Here at Opti-Lube we have noted that not one engine manufacturer (that we have seen) recommends using an emulsifier. Our research suggests this is for one single reason: In the past, many of the emulsifiers used alcohol as a water dispersant, and most of these are bad news for a fuel injection system. 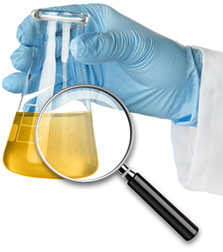 We have found that there are 3 types of alcohol that diesel engine builders have problems with: Methanol (Very bad), Ethanol (mildly bad), and Propanol (on the fence, typically used in emergency dewaxing or icing products). Methanol may be a great power producing fuel but it can mess up a diesel engine in short order. Some competitive organizations have restricted the use of this type of fuel in diesels.

So what does the statement “Alcohol-Free” mean? When additive producers state “Alcohol-Free” it is a broad phrase because as we just noted, not all alcohols are the same. There are many alcohol based chemicals, or chemicals in the alcohol family that are not harmful. This can be difficult to explain on a bottle’s small label or to those of us who are not chemists.

The question still remains then, whether an emulsifier or a demulsifier is the best for our vehicles.

If there ever comes a time when emulsifiers are the proven scientific answer to water problems in diesel fuel, Opti-Lube is equipped and willing to adapt in any way to ensure that our customers have the highest quality products available. For now, Opti-Lube has taken the position to rely on our chemists and the research they have conducted, and only use Demulsifiers in our blends.

Their word, along with every engine manufacturer (that we are aware of), have not accepted emulsifiers as an answer to water problems in diesel fuel. Many self proclaimed “diesel experts” on the internet or suppliers of emulsifier additives are very vocal and can argue the point till the cows come home. But the fact remains that the people who should know are standing behind demulsification (for now). We will too.

*FREE & FLAT RATE SHIPPING APPLIES TO RETAIL ORDERS WITHIN THE CONTIGUOUS US.